The problem with getting prepared for my solo show so far in advance – december 5th here in monroe, plug, plug – is that it leaves me with too much time… idle hands and all that. My brain doesn’t turn off it’s creative impulses. I have several ideas at the moment that may in fact make it into the show – a show i was planning on hanging this weekend… might have to put that off a week… i digress.

In the past, i’ve done work for bands or artists that i like, non-commissioned stuff, just in the hopes that the work could lead to real work. This is actually successful more often than you would think. Maybe because of mutual respect. Maybe because the bands i like are usually independent with small budgets and therefore love doing business with other independents (myself) that don’t charge an arm and a leg. Maybe it’s just serendipity. So, i’ll design a piece, send it to them and wait… like a vulture… and more often than not, i’ll get an email and we’ll end up collaborating somehow. And if not, i still got to exercise the creative demon that was chewing on me and now the artist in question knows they have a fan and that can’t be bad thing, right?  So I’ve been wanting to do something for rap collective, Doomtree, or more specifically P.O.S., for some time now. I’ve been a fan of his for years and frequently listen to his music when i paint. Recently he’s released a couple new joints so i thought the time was right to do something.

So, one night when i didn’t have any freelance to work on (a rare and glorious thing), i spent a couple of hours and put this together: 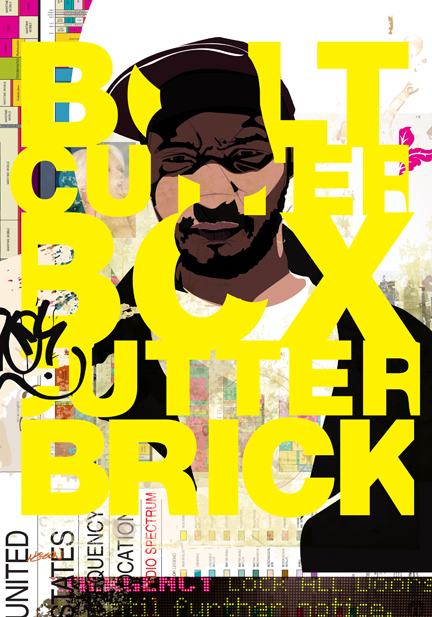 I think it came out pretty good. The words in the foreground say, ” Bolt cutter, box cutter, brick,” a verse from one of his songs that always gets stuck in my head. I wasn’t worried so much about it being legible – those with any interest will know.

Most of this was done in illustrator. Finished it out in photoshop because i thought i would put some photo-style flourishes in it but i really didn’t . There’s some photography in the background and some rastered images but nothing i couldn’t have just placed in illustrator. This entire paragraph is only for the graphic nerds. Here’s a detail: 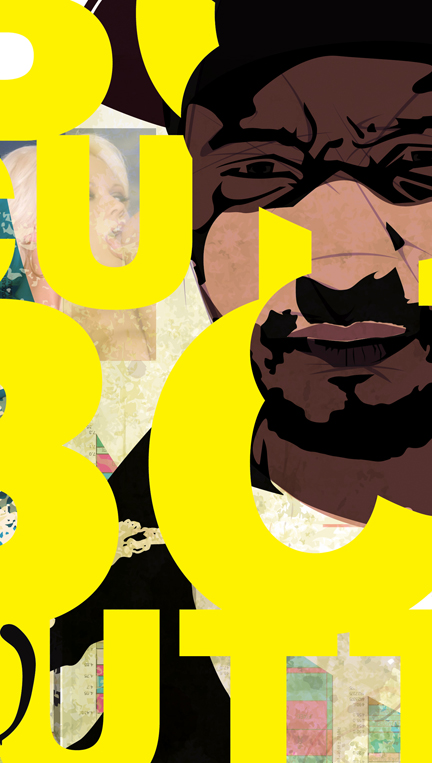 That photo of the girl in the background looks way more explicit than it actually is. So Mom, if you’re reading, she’s actually licking her own knee – still, it’s provocative and that’s the point. There’s a photo of some riot cops in there too but it’s cropped out.

So that’s that. Maybe the P.O.S. camp will give me a shout. If not, it was a fun piece to do and gave me something new to post.  I have one final painting (probably) thats included in my show that i’ve yet to post, so i’ll be doing that soon … then hopefully I’ll get started on that other project i eluded to some weeks ago. I think i gotta get this show done and out of my system before i can move on to something big. Stay tuned. And thanks for reading. – jbn

UPDATE – I typed all of the above last week but never posted it because when i write these posts, it’s like a stream of consciousness sorta thing and i like to go back and edit – which i never got around to doing – so it sat in limbo… but in the meantime i got an email from P.O.S., the man himself. He was complimentary and thanked me for the design. So that was very cool.